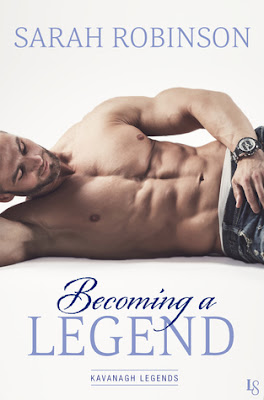 Kane Kavanagh has always had one goal: being the best mixed martial arts fighter alive. With the MMA National Championships in Las Vegas fast approaching, the man they call “Killer” has no intention of letting anyone or anything get in his way. Somehow, though, a feisty opponent has slipped beneath his guard—and stolen his heart. Fiery and passionate, Nora Hannigan is harder to pin down than any rival Kane has faced in the ring. And she isn’t afraid to tell Kane that she wants nothing to do with him.

With her best friend about to marry into the Kavanagh family, Nora has been resisting Kane’s shameless attempts at flirting for months. But after their undeniable chemistry finally takes over, leading to the hottest night of Nora’s life, she’s running scared. There’s a lot about her life Kane doesn’t know, and she won’t be responsible for ending his career. Now Kane’s out to prove that he’s ready for commitment by winning her heart—and he’s never lost a fight.

Becoming a Legend is the 3rd book in Sarah Robinson's Kavanagh Legends Series. This book can easily be read as a standalone. I have read and loved them all so far. I will be honest and say that I was hoping when I first seen a new Kavanagh Legends book on netgalley that it would be Quinn or Jimmy's book. They both piqued my interest. Kane was my least favorite brother so I felt a little disappointed that it was Kanes book. Funny that I ended up loving Kanes book more than the first two books! Kane was just so cocky, playful, charming and down right sexy. He snuck in and stole my heart. Nora won me over as well. She was so deep. There was just so many different sides to her. Nora was very likable and down to earth. I could totally understand the things she did and the reason she felt the way she did. I felt very connected to both of them.

Nora and Kane had tons of passion. They both had so much going on in their lives that they didn't really have time for a relationship, but they just couldn't keep their hands off each other. There was lots of steamy sexy time in this book and Kane was a beast. I loved the plot, the action and the backstories of this book. All of the Kavanagh family have such unique and cute personalities that they just add so much to the books. I believe Quinn's book is next and I truly can't wait to get my hands on his story. The little peeks of Quinn so far are just so good. I just know Quinn is going to be yummy! I also can't wait for Jimmy's book either and I hope that cousin Casey gets a book too! Great addition to the series.

Posted by Jessica's Totally over the top Book Obsession at 5:06 PM