The Scot Beds His Wife 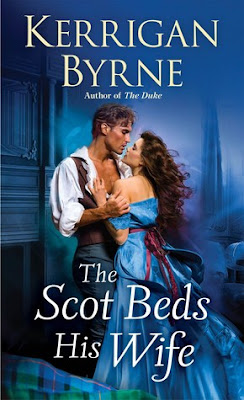 Gavin St. James, Earl of Thorne, is a notorious Highlander and an unrelenting Lothario who uses his slightly menacing charm to get what he wants—including too many women married to other men. But now, Gavin wants to put his shady past behind him...more or less. When a fiery lass who is the heiress to the land he wishes to possess drops into his lap, he sees a perfectly delicious opportunity...

A marriage most convenientSamantha Masters has come back to Scotland, in a pair of trousers, and with a whole world of dangerous secrets from her time spent in the Wild West trailing behind her. Her only hope of protection is to marry—and to do so quickly. Gavin is only too willing to provide that service for someone he finds so disturbingly irresistible. But even as danger approaches, what begins as a scandalous proposition slowly turns into an all-consuming passion. And Gavin discovers that he will do whatever is necessary to keep the woman he has claimed as his own...

3 O, what a tangled web we weave Stars

The Scot Beds His Wife, the 5th book in the Victorian Rebels series, was an okay read for me. It was slow going. I didn't start to really enjoy it until right after they were married, and that was 200 pages into the book. So for 200 pages I was zoning out, and kinda bored. My problems with this read was the overly flowery words that felt like filler, the crazy amount of the word FUCK in this book, and the ridiculous over the top one upping of the hero. Here are just two quotes:"Suddenly an extremity of exhilaration and anxiety stormed through her. She was no untried blushing bride...but this man had famously fucked more women than Casanova and Lord Byron combined."-Sam

"I already told you, I'm no virgin. And everyone knows you've made love to most of the maidens in Europe, and half the married women, besides."-SamI mean come on!!!! He fucked more women than Casanova and Lord Bryon. That is just so hard to take serious. And lets touch on the fact that the heroine Sam was dropping the F bomb every other word. I know there were women who cussed back in the day, but they were super rare. The way in which Sam did it, and the amount of the word fuck coming from her, and the hero's mouth was again over the top and not believable. Now all that being said It was still an okay read. The last 190 pages were really good. I just wished I could have gotten into it sooner. I still love Kerrigan Byrne and I can't wait to see who's book is next!

Posted by Jessica's Totally over the top Book Obsession at 2:00 PM No comments: 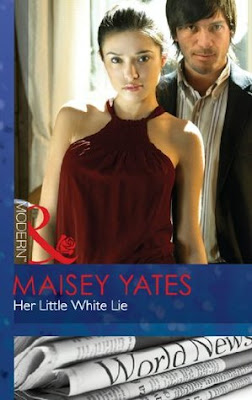 DANTE ROMANI’S SHOCK ENGAGEMENT TO EMPLOYEE!Paige Harper can’t believe her little white lie has made the headlines. The only way to secure the adoption of her best-friend’s daughter was to fake an engagement with her boss. Now she can hear him marching down the corridor to fire her!The press have spent years cultivating Dante’s devilish persona, but now he wonders if this ‘engagement’ could be an opportunity to change that. Paige will wish he had fired her when she hears his terms: if she wants his ring she’ll have to play the part of devoted wife in public and in private…

*Spoilers*When I started this book I figured it would be cheesy cute and easy breezy, but I loved this book.... It was so great! Paige lies and says she is getting married to her boss Dante so she can adopt her best friend who died daughter Ana. It makes the news paper and her boss finds out. He goes along with the lie and moves her in his home and plans to marry her and help her get her daughter and in turn getting good press to turn around his bad image. While playing house they fall in love.Paige: I loved Paige's personality. Playful, funny, bright, strong. Dante: Is a man hurting who thinks he can't feel or he would lose control and turn into his father a evil man who beat and killed his mother when Dante was only 6 and watching. I loved watching Paige and Ana break down all his walls. This story made me laugh and feel their pain. This was a great book a real surprise their love felt real and not rushed!

Posted by Jessica's Totally over the top Book Obsession at 8:00 PM No comments: 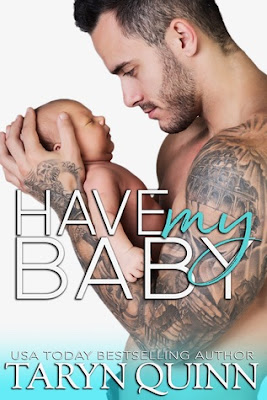 That was what my single dad best friend Seth said to me while I was waitressing at the diner.  His little girl wants a sibling. But Seth is a workaholic millionaire and doesn't have time to meet someone. Someone who won't screw him over, like his kid's mother.  Only problem is this someone has secretly been in love with him since high school. I've been hiding it forever, not wanting to risk our friendship. Sleeping with him is my biggest fantasy. And I've fantasized plenty, being a virgin. Another thing he doesn't know.Now I have to make the biggest decision of my life.Is having a no strings attached affair just to make a baby better than never having him at all?

3 Have my baby? Stars

Have my baby is my first book by Taryn Quinn and it was an okay read. Don't get me wrong I enjoyed it. The sex in this book was smokin' hot and written well. I also love friends to lovers books but I didn't connect to the couple. I didn't feel their relationship. There wasn't a build up it was just assumed they were besties. But I never felt the their bond. I also didn't really understand what the conflict was. I didn't understand why Ally kept running. Nothing was setting her off, no clear problems. It was just like drama for drama's sake. Still it wasn't a bad read. It would have made a great shorter story erotica. But for the lenght of the book I would have like more relationship development.

Posted by Jessica's Totally over the top Book Obsession at 5:45 AM No comments: