Book Review of Force Of Temptation (The Mercury Pack Series) 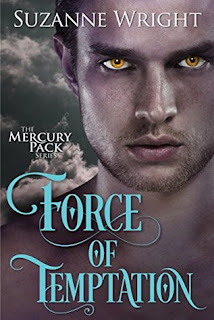 Harley Vincent is resigned to life in the human world. Sure, being a margay shifter is half her nature, but life among humans gives her the freedom to roam and do as she pleases. That is, until anti-shifter extremists target her, putting her life in immediate danger.

When an old acquaintance and onetime fling, Jesse Dalton, shows up to offer the protection of his pack, Harley hesitates. She may have feelings for Jesse that go beyond their one-night stand, but life among shifters means giving over her independence to the needs of pack. Plus Mercury Pack has its own threat to face: a rich half-shifter is determined to claim their territory at any cost.Jesse, who lost his true mate as a child, has wanted Harley since their night together, and he’s not letting her go again. They may not be destined for each other, but he knows she belongs to him and with his pack. Even if he can convince her to join him now, can he convince her to stay?

“I don’t play games, Harley, so I’ll tell you straight. I want you. In my bed. In my life. Where you belong.”-JesseJesse Dalton pack enforcer for the Mercury Pack was a dark and damaged wolf. He lost his true mate when he was a kid and it altered. He was lost in his pain for a long time. He walked around a shell of a person until Harley brought him back to life. Now he will stop at nothing to have the little Margay as his mate. Jesse was everything I have come to expect from SW's heroes. He was pushy, dominate, sexy, protective, and deadly. In other words a yummy wolf shifter that stole my heart. Harley Vincent was a lone half human/ half Margay shifter that lived in the human world. She had tried the shifter world when she was a child and they treated her like shit. All but the one boy, the one she had a huge crush on Jesse. After a one night stand 3 years ago Jesse is back in her life telling her that she will be his mate and that he is going to protect her. Making her kitty want to claw up his domineering face and rub all over him and purr at the same time. Harley was snarky, sassy, loyal, and totally kicked some ass. She was a very likable heroine."I'm asking you to forsake your true mate. I'm asking you to step back into a world that let you down. I'm asking you to give me every part of you. And I'm asking you to accept every part of me-a lot of those parts are dark and broken."-Jesse

"That right there is why you're perfect for me, Harley. You take no shit." "So you admit this is shit?"-Jesse and HarleyI was really worried about the fact that Jesse and Harley weren't true mates. That was a totally different thing than what I am use to with Suzanne Wright. All the other couples have been true mates. I worried that Harley would play second place to the ghost of his dead true mate or that Jesse would feel like second place to the true mate out there that Harley never met. But I was wrong. I felt their love and connection. They felt like true mates to me. One of the things I really enjoy about shifter books is when the shifter has animal like characteristics. As an animal lover I enjoy picturing all those cute animal qualities. So to say that I loved every bit of the Harley's cute margay is a understatement. I am a huge cat lover and I was just giddy over the cute little margay's antics. Climbing trees, the purring, sleeping on her mates chest, and riding on the wolfs back omg it was just damn cute! "This is my pussy, Harley. You're never gonna take it away from me again. You can't. It doesn't belong to you. It belongs to me. Every part of you does."-Jesse

"Really, it was inevitable. I'll tell you how it's going to work: I'll claim you, you'll claim me, you'll come to trust the pack, you'll settle here, we'll imprint, and we'll be fucking happy." Harley could only stare at him. "You've got things all all planned out, huh?"-Jesse and HarleyI loved everything about this book. I loved the plot. It gave me plenty of action. I enjoyed the cute kids especially Willow and the way she was always quoting lines from scary movies. Tray and Taryn made an appearance. I always love when I get time with Tray and Taryn(all time favorite couple). There was time with the pack mates and it's always good to get to know the pack better. Something is going on with Eli that has me wanting his story next although I wouldn't mind Bracken's story either! Overall this book just did it for me. Another great book by Suzanne Wright! "I'd answer you, I really would... but talking to you is about as appealing as sandpapering a wild cat's ass while having my nipples chewed off by rabid dogs." -Harley

Posted by Jessica's Totally over the top Book Obsession at 1:21 PM