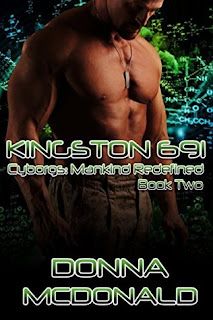 The Blurb:How can he love a wife he doesn’t remember?

Kingston West put his military service behind him much easier than most of the men he served with during the final war. As far as he was concerned, the cyborg who was Kingston 691 no longer existed. And the Cyber Husband program? He viewed it like he viewed having been a prisoner of war. Both were just service related memories he didn’t plan on recalling. The future was all he needed. At least he felt that way until he discovered one wife’s file had been totally erased from his Cyber Husband records. Only her name remained in data storage, though her family swore they’d had a loving relationship. To put the past completely behind him, King has to first find the now missing Seetha Harrington. Before he can enjoy his new beginning, he needs to find out why Norton took those seven years together away from both of them.

4 Trying to Remember Her Stars

Kingston 691 the second book in the Cyborgs-Mankind Redefined Series by Donna McDonald was better for me than the first book. I love this series plot story of evil mad scientist turning cyborg soldiers into mindless robot slaves. It's something I haven't read in a series and it kept me entertained. This book had a faster pace and more action than the last book. I loved Kingston and Seetha both and felt they had a sweet love story. Although I love Peyton more he just had that something special. I still didn't get a clear picture in my head of either character's looks, the same as the last book. I really wish there would have been more details to their looks. When I can picture what the character looks like, I connect with them more, and they feel more real. While this book didn't end with a cliffhanger it ended with some unanswered questions that will be carried out into the next book. I really enjoyed this book I sat down and was up til 4am reading it to the end. I am looking forward to more books in this series, especially Marcus's book.

Posted by Jessica's Totally over the top Book Obsession at 9:07 AM