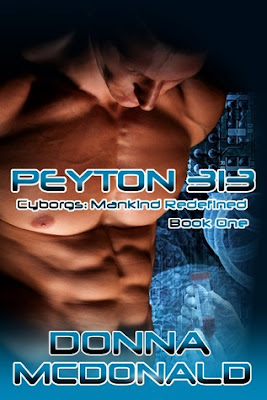 Worst epic fail of her scientific career? Falling for a cyborg she helped create.

Kyra Winters never meant for her cyber science discoveries to be used for evil, but that’s exactly what happened. Now returning Peyton 313’s humanity is the last chance she’ll ever have to atone. She can’t get back the lost decade, but she can change the present by restoring the cyborg who was once Marine Captain Peyton Elliot.Certainly her grand plan for rectifying her mistakes didn’t include madly kissing the confused, passionate Marine when he begged her to. The same scientific mind that constructed the cyborg creator code now warned her not to let Peyton’s tempting offers of heaven cloud her rational decision making. Yet it’s difficult to resist the cyborg she’s restoring when he’s also the most intriguing man she’s ever known.

Mild Spoilers
Peyton 313 the 1st book in the Cyborgs-Mankind Redefined series was a pretty good read. I have never read any books like it before with the whole Cyborg plot so that was cool and got me intrigued. I have also never read any book by Donna McDonald and for the most part I enjoyed her writing style. I really only had two problems with this book that made it the 3 star rating for me..... 1. Kyra cried all the time My God the woman bawled! I get that she feels bad, hell I understand she feels guilt and I could understand a few tears but damn!

2. The story slowed down at like the 30% mark and didn't really pick up until the 75% mark so there was some dragging going on.

Peyton I loved. He really made the book for me. He was sexy, funny, and he stood out from other heroes I have read. I liked Kyra okay she had moments of sass, and she could be brave and good but she just cried at a drop of a hat and it was a little annoying. She was also really good at having pity parties for herself. Blamed herself for everything. I felt that Peyton and Kyra had a great connection and lots of passion, but I was a little thrown off by the age thing. Kyra is 52 and Peyton was 40 something but looked 25? I didn't really get a good mental picture of the two of them. One minute it would say Kyra didn't look a day over fifty and the next it would say people live to 150 and that 50 was middle age, then it would say she looked older, then that she was in good shape. I was confused. Because there wasn't clear details on Kyra or Peyton's looks and because I never could picture them in my head they never felt real to me.

The plot of evil mad scientist turning cyborg soldiers into mindless robot slaves was a good one. It really hooked me. I really did like the layout of the world the story was set in. I really liked the other cyborg soldiers in this book especially Marcus. I am looking forward to Marcus's book he was so sad I just want him to get his HEA. I think this book, though it had a few problems, was a good start to a series.

Posted by Jessica's Totally over the top Book Obsession at 10:58 AM