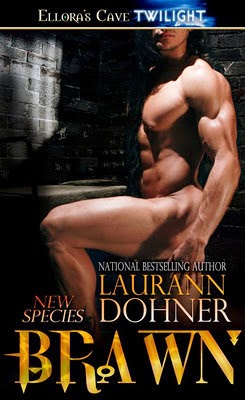 The Blurb:
One look at Brawn and Becca is wondering how he’d look without his clothes. Brawn is instantly attracted to Becca but has sworn never to touch a human female. They just aren’t sturdy enough and he likes his sex a little rough. He is shocked to learn he’ll be living with her when she refuses to leave her home. He is there to represent New Species and to learn about humans so maybe this will be a good educational experience. He just has to keep his hands off her.His good intentions go astray when they are kidnapped and locked together inside a cage. Brawn finds himself reliving a nightmare when he is once again subjected to breeding experiments at the hands of New Species’ enemies. They will use Becca to get what they want from him. Brawn will do everything he can to protect her but they only have each other to depend on while trying to survive.

“I like directness too. I did take it wrong at first and mentally agreed it would be a tight fit. You’re small. For a second, as I admired your bent form, I forgot why I’d never touch a human female and I growled in appreciation. My kind do that when we’re aroused. You have a nice form.”
Brawn is the 5th book in the New Species Series and it is chock full of dramatic goodness. Brawn is the new member of the task force team that becca's father leads. He has never wanted to be with a human to share sex, they are too soft and breakable, and he likes his sex rough. He meets Becca and is very attracted to her, but plans to be good and keep his hands to himself. All bets are off when they are both kidnapped by an ex Mercile Doctor, and locked in a cage together with only each other to lean on. They fall for each other while locked away together , but when help comes will they go back to life as normal or will they find a way to Stay together?
“I’m turned-on and you’re not. This is traumatic for you, I’m aware of that, yet I still ache to feel your hands on me.”

Wow this book is so full of drama. Add a baby, a over the top protective father, and a serious lack of communication skills and you got a angst filled emotional read!

“Relax for me, beautiful. I’m going to enter you slowly and make you come hard for me.”
Brawn:
“Her shock will wear off soon and she’s going to be pissed but she is cute when she’s mad.”

Brawn was sweet, sexy, and protective. I loved him. When he dropped to his knees and buried his face against her thigh and said “Do not send me away.” OMG I freakin melted. He was a little bone headed though and didn't seem to know how to tell Becca how he felt. Communication problems big time!
“You smell so good and taste it too. I wish I could strip you bare and explore every inch with my hands, nose and tongue. I’d lick every spot that would make you moan my name.”


“I’m your male,” he growled softly. “No one else cares for you but me. I will beat any male who tries. You might not want me to claim you and you might refuse to be my mate but you won’t refuse this, Becca. I will be here for you at all times. It will be only me inside you. Only me touching you. Only my lips kissing you.”
Becca:

“I’m tougher than you think and I’m not afraid. I can’t even think when you’re kissing me. You’re totally incredible.”
I thought I would hate Becca. I read some of the reviews before reading this book and the way everyone acted I just knew I would wanna punch her in the face, but I liked her . I totally got where she was coming from. Don't get me wrong they both had huge communication problems and for two blunt people they should have just came straight out with their problems and talked , but She had reasons to feel the way she did and alot of people would have acted the same way. Becca has some emotional scars, but I thought she was brave, outspoken, and had a good heart.
“You’re sorry for what? Kissing me until I couldn’t think straight and enjoying it? Wanting me? I feel the same way about you. My only regret is that you stopped.”


“The first time I saw Brawn I thought…” She sniffed. “I thought he had the most beautiful eyes I’d ever seen. He was so hot. I was attracted to him instantly. I—” She suddenly laughed. “I thought he’d make a great stripper with that body and wished I could see him out of his clothes.”

“I love you. Never doubt that. You’re everything to me. I want and need you.”
If you love drama and angst this is the book for you. I felt it was a good read and I really liked the ending. I can't wait to read more about the new males found. I am on to the next book!! Here is my favorite moment from this book:
“He said he would like to keep putting babies in your belly over and over again so that you could never leave him because he fears human divorces and couldn’t stand ever losing you.”Becca looked at Brawn, stunned. Hope gripped her hard that Breeze was stating true facts. It would change everything, mean he really did want her before there’d been a baby. His frown deepened. “Do not be afraid of me.” “We figured after eight or nine little baby Brawn sons that you would be too tired to even think about wanting to leave. Was that a good number of children to make you too exhausted to ever leave him?” Breeze grinned at her. Becca suddenly laughed as her gaze fixed on Brawn. The confused look on his face made her laugh harder. She gripped her stomach and enjoyed the humor. “Becca?” Brawn was concerned as he touched her arm. She got control and wiped at her eyes. “You wanted me to birth your own little army of mini Brawns to keep me with you, huh?” “It was just a thought.” A blush darkened his cheeks

Posted by Jessica's Totally over the top Book Obsession at 10:37 PM